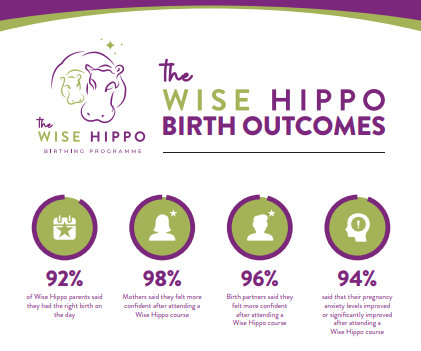 It’s our 9th birthday!!! To celebrate, we’ve taken the time to reflect on our current birth outcome statistics and share what Wise Hippo parents have found most beneficial for their birthing journeys.

So, we invite you to grab a cuppa, get comfy, and relax as we share our birth outcome stats with you.

There are around 600,000 births a year in the UK, and since the start of the pandemic, many of these parents have been forced to navigate their way through an understaffed and unpredictable maternity system, with many coming away feeling let down and unsupported.

Despite this, it has been extremely interesting to discover, throughout the process of collating our birth outcome stats, how emotionally unaffected many Wise Hippo parents have been during these challenging times. Why is this and what makes them so different?

Just a small percentage of these 600,000 births have been Wise Hippo births, and we are delighted to share with the world our latest statistical findings. Over 500 parents have so far given us there valued feedback.

What we have to share with you here, undoubtedly shows that preparing for birth ‘the Wise Hippo way’ really can make all the difference to the outcome of a birth experience both physically and emotionally.

Our motto here at The Wise Hippo is 'The Right Birth on the day', and we are delighted to discover that 92% of all Wise Hippo parents surveyed said they achieved 'the right birth on the day'. We tried really hard to find NHS statistics regarding birth satisfaction and emotional wellbeing to compare this incredible statistic with, but unfortunately, we couldn't find anything.

Here at The Wise Hippo, we believe that a parents' mental health and the way they feel about their birth experience afterwards is paramount and this is always at the forefront of our minds when preparing and educating expectant parents with these 'tools for life'. Setting parents up to say that The Wise Hippo Birthing Programme will promise a particular type of birth is not our style and instead we focus on parents achieving a birth that is right for them and their baby on the day.

We know birth matters, as it can impact a person's life in so many ways. The many lasting effects of birth trauma is a blog we will leave for another day, but let's just say a negative birth experience sure does make starting out as a new parent extremely challenging. From our amazing stats here it is very clear to see that no matter what type of birth was achieved a massive percentage felt positive and extremely satisfied with the outcome and that is what really matters. 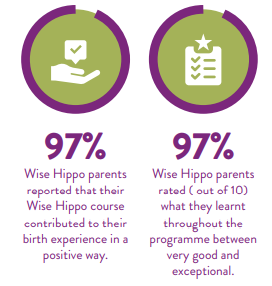 Today, we are not only celebrating our 9th birthday, we are celebrating our amazing birth outcome stats. Thank you to all Wise Hippo teachers and parents who have given us their valued feedback and shared their thoughts and feelings with us so that we can shout from the rooftops how proud we are of what the entire Wise Hippo community has achieved.

So, without further ado, here are our birth outcome results...

Here are some further details regarding our findings...

* 25% of all Wise Hippo mothers reported that they were not experiencing anxiety before attending a course.

* Of those that suffered from pregnancy anxiety beforehand, 94% said that it improved or significantly improved after attending a Wise Hippo course.

* An impressive 17% (compared to 2.4% UK national average) of Wise Hippo parents had a homebirth, with 83% birthing in a hospital environment

* 74% of Wise Hippo parents who planned a homebirth were successful in birthing at home. 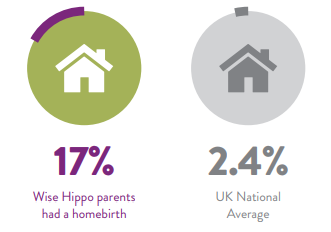 * The Wise Hippo induction rate was 24%, in comparison to the national average of 34%, meaning expectant parents are more likely to be induced if they do not attend a Wise Hippo course.

* 47% of Wise Hippo parents required no pain relief at all during labour and birth compared to the National average being 37%.

Here is our breakdown of what types of anaesthesia was used:

* We also found that 90% of Wise Hippo parents did not require an assisted/instrumental delivery.

* 86% Wise Hippo parents had a vaginal birth (national average is 67%) meaning our Caesarean birth rate is much lower than the UK National average being 32%.

* This tells us that expectant parents who do not attend a Wise Hippo course are more likely to have an emergency Caesarean birth.

* A huge 93% of Wise Hippo parents who had a vaginal birth said that they had ‘the right birth on the day’.

We can confidently say from these statistics that regardless of the type of birth, you are just as likely to say that you had the right birth on the day after attending a Wise Hippo course.

* Only 13% of Wise Hippo parents reported that they had an episiotomy (national average is 14.28%)

* A gigantic 99% of all Wise Hippo parents said that because of what they learnt in their Wise Hippo course they were able to make informed decisions on the day.

* 91% of all Wise Hippo parents were able to have skin to skin contact within the first hour of birth (the national average is 74.7%.

* 85% of all Wise Hippo parents who had a Caesarean birth also had skin to skin contact within the first hour of birth.

* 66% of all Wise Hippo parents were able to wait for the umbilical cord to stop pulsating before clamping and cutting. It is a shame we couldn't find a UK stat to compare this with.

* 39% of Wise Hippo parents reported that they had a natural 3rd stage of labour (birthing of the placenta) and again, we could find no UK national average for this.

* Here at The Wise Hippo, we love hearing how much parents enjoy using their ‘tools for life’ after birth also…73% said they continued to use them postnatally.

* 97% of Wise Hippo parents said that what they learnt in class contributed in a positive way during labour and birth.

* 98% of Wise Hippo parents said they would recommend attending a Wise Hippo course in preparation for birth to others.

* When asked to rank The Wise Hippo Birthing Programme out of 10 – A huge 97% said the programme was between very good and exceptional.

* Wise Hippo parents said their favourite technique was 'The waves of relaxation' breathing and listening to The Wise Hippo relaxation sessions.

Collecting these statistics has given us the opportunity to really explore the benefits of hypnobirthing the Wise Hippo way and we couldn't be feeling more proud of the entire Wise Hippo community right now.  Our latest stats continue to confirm that The Wise Hippo Birthing Programme is a highly effective way to prepare for birth and beyond.

Hippo birthday to us!